Founded and outlined On September 15, Sharp Corporation (hereinafter “Sharp”) commemorates its 110th anniversary. Founder Tokuji Hayakawa established a metalworking shop in Tokyo on this day 110 years ago in 1912. Later he invented the “Ever Ready Sharp Pencil,” a twist-type mechanical pencil that would later become the origin of the corporate brand.

Sharp is a worldwide developer of innovative products and core technologies that play a key role in shaping the future of electronics. Sharp sets its business vision as “Changing the World with 8K+5G and AIoT”. 8K is an ultra-high definition next-generation video standard with four times the resolution (7,680 x 4,320 pixels: 33.18 million pixel resolution) of 4K (3,840 x 2,160 pixels: approximately 8.29 million pixel resolution), and 16 times that of present-day 2K hi-vision broadcasts (1,920 x 1080 pixels: approximately 2.07 million pixels). 8K technology creates images that reveal a world beyond our everyday reality and gives birth to thrilling new discoveries. 5G is the next generation of mobile data transmission. As well as significant advances in data transmission speed and capacity, it delivers ultra-low latency and multi-terminal connectivity. 5G expands communication potential to facilitate all-round connectivity between users and all manner of devices. AIoT is Sharp’s unique synthesis of AI (Artificial Intelligence) and IoT (Internet of Things), a tactile and intuitive approach created through the application of cloud connectivity and AI to a full suite of familiar everyday appliances, transforming devices from useful tools to active partners in addressing the needs of individual households and society as a whole.

To achieve its vision, Sharp uses its three core brand businesses, Smart Life, 8K Ecosystem, and ICT, along with two device businesses, Display Devices and Electronic Devices that support them, in an integrated fashion in pursuit of “One Sharp” business. Sharp delivers featured products for household use such as AQUOS brand TVs and smartphones, together with Plasmacluster-equipped air purifiers, refrigerators, washing machines and vacuum cleaners, and Healsio brand ovens and anhydrous cooking pots for kitchen use. Sharp products are also widely used in office scenes, led by multi-function printers, monitors, interactive display systems and notebook PCs etc. Systems integrating services with hard and soft elements are also introduced by the company, known as COCORO+ services, together with other 8K+5G systems and office use systems etc.

Based on its business creed “Sincerity and Creativity,” and founder Tokuji Hayakawa’s ideal to "Make products that other companies want to imitate," Sharp has continued to introduce unique products and solutions including world-firsts and Japan-firsts to contribute to the development of society. As a result, Sharp has reached many milestones over its history of 110 years with its products and solutions. Some examples are: Introducing AQUOS brand LCD TVs from 2001 and shipping 500 million units by end of September 2020, developing photovoltaic power generation since 1959 and on for over 60 years, introducing its featured Plasmacluster air purifying technology on October 2000 and achieving 100 million units shipped worldwide by October 2021, developing the world’s first all-transistor calculator in 1964 and celebrating 50 years in calculators business in 2014, developing mobile phones since 1994 and delivering many featured products such as the industry-first camera-equipped mobile phone in 2000, developing convection microwave ovens since 1961 and introducing Japan’s first mass production model in 1962, celebrating its 60th anniversary in 2022, introducing its first multi-copier in 1972 and celebrating its 50th anniversary in 2022, and most recently, starting productions of face masks from February 2020 and reaching total 300 million shipment by November 2021.

Such activities over all these years have been recognized by various worldwide institutes, including IEEE*1, the world's largest academic society for electrical, electronics, information, and telecommunications engineering, recognizing three individual developments by Sharp as IEEE Milestones*2, namely “Pioneering Work on Electronic Calculators”, “Commercialization and Industrialization of Solar Cells” and “Sharp 14-inch Thin-Film-Transistor Liquid-Crystal Display (TFT-LCD) for TV”.

Footsteps to an Electronics Manufacturer: Development of Radio and TV In 1923, the founder experienced the Great Kanto Earthquake and transferred to Osaka. Searching for new opportunities, he set his eyes on the start of radio broadcast in Japan, and succeeded in assembling the Japan-first crystal radio set in April 1925. Later, in 1953, upon the start of TV broadcasting, Sharp started Japan-first mass production of TV sets, leading it to develop into a comprehensive electronics company. 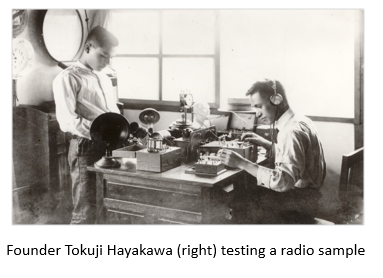 110TH ANNIVERSARY LOGO
Sharp has created a 110th anniversary logo as a commemoration and a sign of gratitude toward the support from our stakeholders over these 110 years. The gently changing colors express transformation to a and green and blue colors represents the image of ESG business. 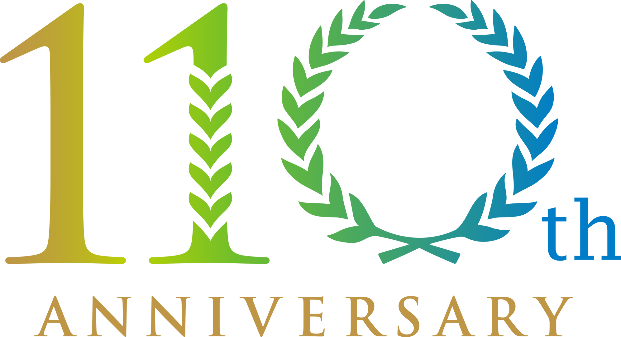 On this 110th anniversary year, Sharp has introduced a new management system to realize transformation to re-emphasize on ESG and raise its social value and revitalize its brand for sustainable growth. Management emphasizing o n ESG will be carried out under four major policies:

SHARP Middle East FZE (SMEF) being a subsidiary of SHARP Corporation since 1998 is based in a very strategic location. Dubai being the link between east and west, it provides ample opportunities to SHARP to further contribute towards the improvement of human living and society. Besides having a strong team within SMEF, we have established partnerships across the region ensuring a thorough network of distribution and after-sales-service for SHARP products. We at SMEF facilitate and serve all our Partners/Customers and End Users not only with Consumer Electronics Products but also with Business Solutions B2B product line up.

Sota Saito, Managing Director – Sharp Middle East FZE (SMEF), also takes this opportunity to convey congratulations to all the internal and external stake holders specially partners, customers, and all the consumers. And he highlights the quest to scale new heights of excellence following 3Cs (Customer, Collaboration & Creativity) - the fundamental principles on which SMEF operates. By working alongside partners and customers, and building trust through transparent communication and knowledge sharing, breakthroughs and marvels can be achieved. 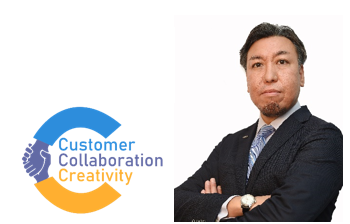